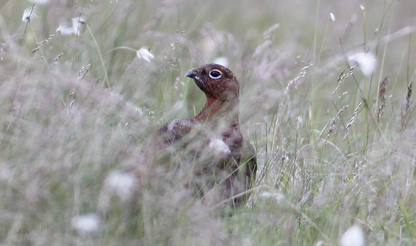 Our last Update in May started with the words ‘So far so good’ and ended with the sentiment that all would be well provided there were no more meteorological surprises. However we are still in the grips of the longest, hottest and driest period of summer weather since records began. From memory it is certainly more extreme than the summer of 1976 and we are told this weather isn’t going to break until September.

Our normal weather pattern is for thunderstorms in June which if prolonged can have dire consequences for grouse chicks but this year we are in un-chartered waters or rather a ‘perfect storm’ of conditions. The sudden transition from a very hard late winter to a hot dry summer occurred on the 18th April when the wind direction changed from N.E. to S.W. and the warmest Spring day for 70 years was recorded.

Heather plants, already stressed from snow and ice storms in March were then hit with hot, dry weather with virtually no moisture to help their recovery. Weakened plants succumbed to heather beetle and there are  swathes of heather moorland affected by this pernicious pest. Deteriorating heather plants means less food to sustain both young and old grouse. Gardens took a beating and without watering on a fairly  regular basis are now looking like the Kalahari.

Weak parent birds have either produced no chicks or small broods of weak chicks, some of which are barely out of their shells. There is a great age range this year but on balance many birds will not be ready to shoot until well into September. This doesn’t apply to all moors and grouse never conform to a set pattern. There will be some winners but probably more losers.

Whilst grouse counts are on-going at the moment, it is impossible to get an accurate picture of what stocks are like; it’s really too hot to count and immature birds do not show up anyway. In this sustained heat grouse will have migrated to wetter areas, even off the moor, to survive. The true picture will only emerge once grouse are driven, when the weather cools down and that is not forecast to happen until September.

So a difficult season in prospect and a year to nurture stocks for the future.

Do call to discuss alternative plans if your programme has been cancelled as we will do our best to make alternative arrangements for you.